1. 🔗 UNDERSTANDING A POC VS PROTOTYPE VS MVP LINKAGE 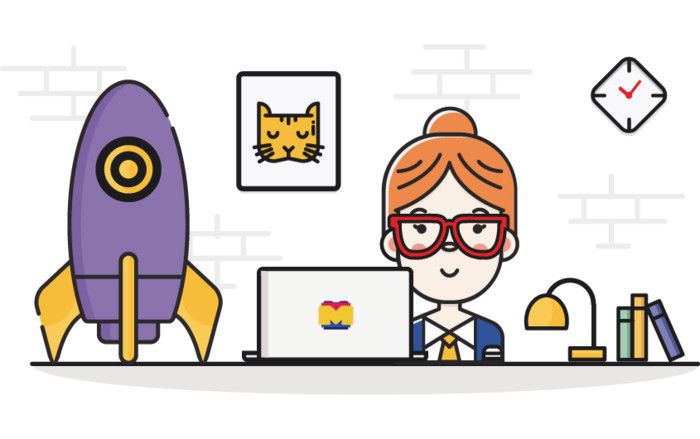 PoC vs MVP vs Prototype: When to Use Each

🔗 Understanding a PoC vs Prototype vs MVP Linkage

A good beginning is half the task, they say. And all the concepts we’re going to discuss today - PoC vs Prototype vs MVP - are about preparing and giving a good kickoff to your Startup.

These terms are relevant for companies that are at the Concept, Pre-Seed and Seed stages so if you can find yourself on that list - welcome aboard!

Despite these concepts aren’t new to the Startup community, they’re still often misunderstood and misused. That’s why in this article we will:

Let’s begin with taking a look at tie-ins between these concepts.

🔗 Understanding a PoC vs Prototype vs MVP Linkage

Before we review the details of each concept, let’s make an important stop and outline a few substantial ideas. Despite some of them may seem familiar, it’s important to lay out the whole picture so we don’t get confused later:

A PoC vs a Prototype vs an MVP visualisation

If we try to visualise these concepts on a single timeline, it will look like this: 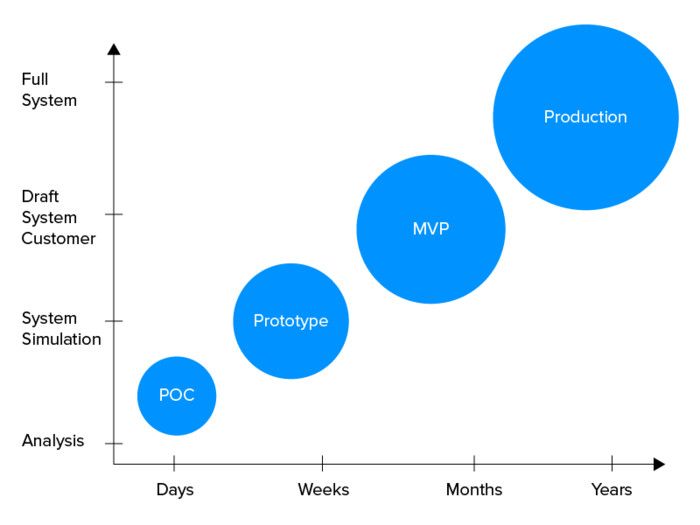 Now as you have a general idea of how they all correspond with each other, let's get into details!

If you’ve read our article about Startup Idea Evaluation, you likely remember what we’ve said about putting a specific technology at the heart of your Project.

How to Evaluate Your Startup Idea

To put it short, your Product should be built around a Problem and rely on technology as a tool to solve it, not vice versa. That’s the moment when you may need a PoC.

A Proof of Concept (PoC or POC) is a small project used to verify that some tech concept (method, technology, integration, etc.) is implementable.

How is it different from an MVP or a Prototype? A few important ideas to mention:

The important thing here is that we’re talking about the technical side of your project. A PoC is just and only about that!

Sometimes people forget about such an emphasis and think that “concept” here refers to their idea in general. Let’s imagine you want to build an accommodation booking app:

So if you compare a Proof of Concept vs a Prototype, the main aim of any PoC is to prove whether some technical aspect of your Product can be implemented. This is a “yes/no” question that provides you with an answer whether it’s possible to build your Product at all.

Why does Your Product Need a PoC?

What are the other benefits of creating a PoC for your Startup Product? Here they are:

How a good PoC can help you at the early stage:

Working with Startups for over 3 years now, we regularly receive many questions regarding the Proof of Concept. Here are some of the most popular ones and our answers to them:

Nope, that’s not actually right. The goal is to find out whether the technology or feature can be implemented particularly within your Project.

If you just know that your competitors are already using the technology you’re interested in, that won’t be enough. However, if you know how they’ve implemented it (for example, you asked and they shared or they have a “how we used X in our app” article in their blog), it’s possible to skip the PoC step.

No, you don’t need it if your Project doesn’t have any tech challenges that you aren’t sure how to deal with.

Yes. Another difference between a PoC and a Prototype or an MVP is that you may need to create multiple Proofs of Concept to validate tech assumptions for different parts of your Product.

As early as possible. It’s better to create a PoC before a Prototype and an MVP since it proves whether your idea feasible at all. If it’s not, building a Minimum Viable Product or a Prototype will be a waste of time and resources.

Let’s say you’ve created a PoC and it proved the tech viability of your idea. What may be the next step? A Prototype!

As we keep to outline the key difference between a Prototype vs a Proof of Concept vs an MVP, let’s get a closer look at the first concept in this line.

A Prototype is an interactive visualisation of your Product that demonstrates user flows and main design elements.

If you’re already familiar with our article about wireframing, you may remember that we described prototypes as the most advanced stage of mobile/web blueprinting.

How to Wireframe an App [Guide]

However, unlike any other blueprinting method or form of project visualization, a Prototype provides you not only with a look but a feel of your application or website.

You may think of a Prototype as a set of designed app/web screens that make up an interactive and clickable model of your Web or Mobile App. Interactivity plays really great role here.

The Prototype is usually created after or at the very end of the Product definition stage right before the Product development itself starts.

Why to create a Prototype for your Startups?

Prototype development may be helpful in many ways. Let's take a look at them:

Benefits of creating a Prototype:

In some way, a PoC vs a Prototype solve the same problem but from different perspectives. While a Proof of Concept confirms that your Product is feasible from the technical point of view, a Prototype ensures that users won’t have UX troubles while using it.

Another similarity between a Proof of Concept vs a Prototype in product development is that they both have a short lifecycle. It’s used for user testing, demonstrations, discussions, etc. When you polish your concept and move to product development, the Prototype becomes obsolete. That’s why it also shouldn’t be expensive to build.

To create a clickable, functional Prototype you’ll need to use specific tools. For example:

How does a functional Prototype look like? Here’s the one we’ve developed for our client:

Ok, now you’ve proven that your idea is feasible from the tech perspective and you know how to implement it from the UI/UX perspective. What’s next? Build an MVP!

Despite the MVP concept was introduced in the far 2001 (when only 8.6% of the world’s population could go online and the Internet used to look like this 🙂), sometimes it’s misunderstood even nowadays. So what is it?

A Minimum Viable Product is a Product that has a minimum needed set of features to satisfy early customers and collect feedback for further development.

So the key Prototype, PoC and MVP difference is that only the MVP in this line is actually a Product. It’s not something you do for your domain expertise and show only to the limited number of stakeholders but publicly release for everyone.

According to Eric Ries, the author of The Lean Startup, the concept is a kind of compromise between 2 extremes:

In the first case, Startups waste too much time and money on a Product that no one may ever need. Even if the Product passes the “toothbrush test”, any pivots or even the smallest changes may be expensive and difficult due to the product’s complexity.

In the second case, there’s a risk of falling into a circle when instead of improving a Product the Team will try to chase what customers think they want.

An MVP tries to deal with both of the problems and says: “Release a good enough Product fast”.

Another misconception regarding the Minimum Viable Product is that it’s something not very useful, having poor performance or design. It’s more like this: 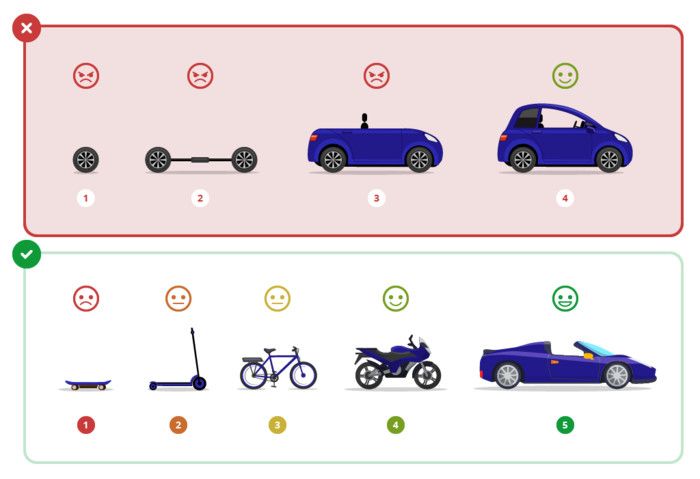 To put it shortly, the key idea here is to create a Product with a minimum set of features to satisfy early adopters - people who have the most intense and frequent need to solve the problem. By giving your solution to them you can check whether the core idea behind it is viable at all.

Such a direct interaction with your end-users is another major PoC, MVP and
Prototype difference.

Why starting with an MVP is a Good Idea?

According to the Lean Startup Methodology, it's better to start with an MVP instead of a full-scale product. Why?

Benefits of creating a Minimum Viable Product for your Startup

7 Reasons Why I Need an MVP for My Startup

The trickiest part here is to correctly define what is the minimum viable part of your Product. We’ll focus on how (not) to build your MVP in one of our future articles. However, no matter whether you’re creating a Prototype, an MVP or a PoC it all goes down to a Problem.

Think of the Problem you’re going to solve with your Product and estimate features from the perspective of how they contribute to this goal.

For example, in Airbnb’s MVP you couldn’t even choose between different locations or properties; they were targeting exactly at tech conference attendees in San Francisco. Even when they’ve scaled and added new properties, users still couldn’t pay online - that’s how simple their Product was.

If you want to dive even deeper into the topic, we recommend watching this video with Eric Ries. Despite it was posted quite a long time ago, it’s still highly relevant:

Let’s take a final look at how different a Proof of Concept versus a Prototype versus a Minimum Viable Product are!

To summarize the key ideas, we made up a comparison table below. Take a look:

Let’s recall the idea from the very first sentence of this article: a good beginning is half the task. That’s why it’s important not only to understand the purpose and use cases for each separate concept but to see how they correspond with different stages of product development.

Now it’s clear that you shouldn’t be choosing between a Prototype vs a PoC vs an MVP since they’re not mutually exclusive. On the contrary, when gradually moving from one concept to another you’ll be able to reduce risks and polish your Product before entering the market. The most likely sequence for you is as follows:

Any questions left? Or are you looking for a reliable Tech Partner to build a PoC, a Prototype or an MVP for your Startup? Drop us a message and we’ll share our expertise to help your Idea skyrocket!

Build Your PoC, Prototype or MVP! 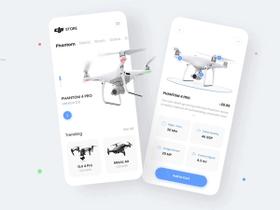 How to Develop a Drone Control Application? 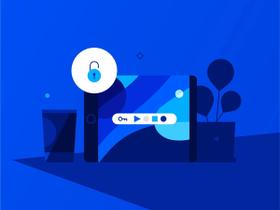 Top IoT Security Challenges and How to Deal with Them